A range of heavy metal genres will be showcased by an exciting array of some of the worlds leading international artists including Destruction, Edguy, Ensiferum, Cynic, Dark Funeral, Sonata Arctica, Destroyer 666, Rotting Christ, and Spawn of Possession.

Also included on the bill are some of Australia's finest artists, such as: Vanishing Point, Eyefear, Virgin Black, Killrazer, Universum, Synperium, Eye Of The Enemy, Defamer and Darker Half.

Check out the Screamfest website for more information on the festival. Tickets available from Just Say Rock and Ticketek. See you all there! 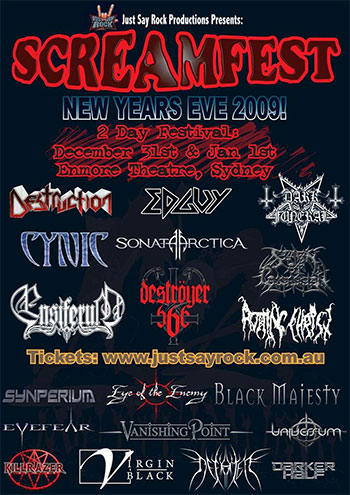