Australia’s Black Majesty return with their sixth studio album titled ‘Cross OF Thorns’. ‘Faster, heavier yet melodic as ever’ the new album continues the band’s evolution of finely crafted melodic power metal anthems. Charismatic frontman John Cavaliere shines on the new album with emotive vocals that showcases the fine ‘timber’ in his voice on songs like Phoenix, Crossroads & Vlad The Impaler - not to mention on the cover version of the Gary Moore classic anthem ‘Out In The Fields’. 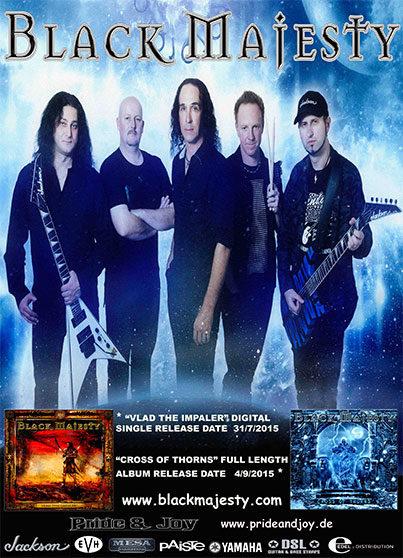 Cross Of Thorns is dedicated to Dirk Illing, the band’s long-time friend and artist of all five previous album covers – “R.I.P. our friend!” Mixed by Roland Grapow (ex Helloween/Masterplan) the album sounds amazing. Big drums, bass and guitars are all evident on the new release.


Previous appearances at fests such as Wacken Open Air, Masters Of Rock, Screamfest and tour supports with the likes of Saxon, Blind Guardian, Hammerfall, Edguy and Dragonforce, Black Majesty will continue to build on their ever growing fan base with further touring, including some upcoming special acoustic shows in Europe to coincide with the release of the new album.


*Black Majesty – ‘Vlad The Impaler’ will be available as a digital single as of the 31st of July.


*Black Majesty – ‘Cross Of Thorns’ full length album OUT on the 4th of SEPTEMBER 2015.